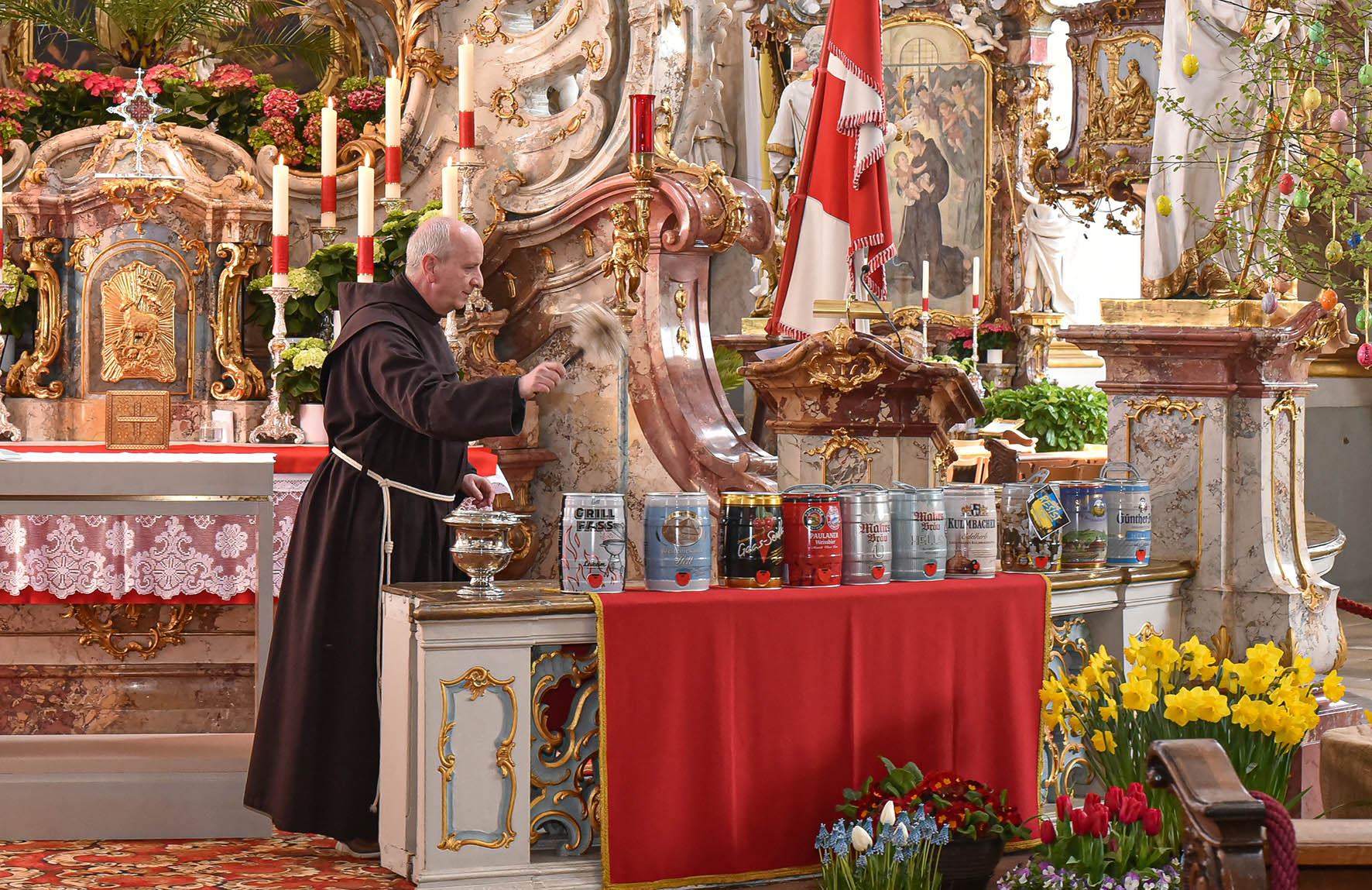 Fundraising for Ukraine with Minikegs!

Beer Day is a very special day for the industry. Envases made it an experience in 2022. They invited people to a charity pilgrimage to Vierzehnheiligen and collected donations for Ukraine. This mixture of spirituality, church service, socializing, and doing good made this Beer Day a day that all participants will remember positively for a long time.

It was a very special day for the Envases company this year! The Day of German Beer not only brought sunshine and blooming meadows, but also more than 50 representatives of Franconian breweries, trade organizations, and beverage market headquarters to Vierzehnheiligen in the Bad Staffelstein district. Jochen Weber of Envases had invited them on a charity pilgrimage to one of the most beautiful baroque basilicas in northern Bavaria. Each brewer was to bring a mini keg and for each party keg brought, the Envases company donated 1,000 euros to ‘Save the Children e.V. (registered association).’ for the children in Ukraine. A total of 22,500 euros was raised. A great result for a good cause after a wonderful eventful day. Collecting donations for Ukraine with Minikegs – Envases made it possible!

A day with Father Maximilian and the Bavarian Beer Queen! 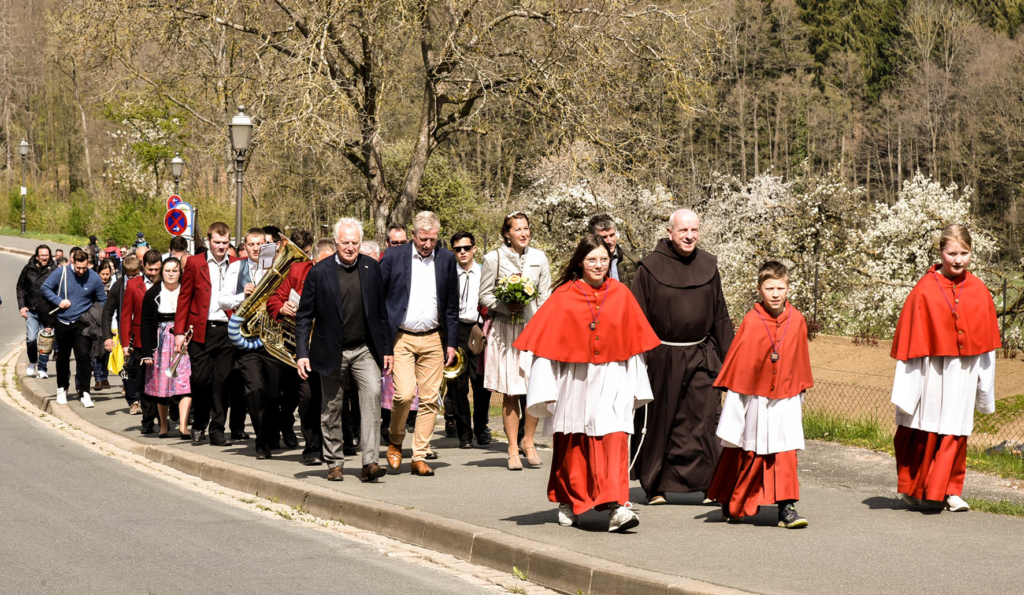 It was an illustrious crowd that made its way to the impressive Basilica of Vierzehnheiligen at noon on the 23rd of April. Three young altar boys made the start, followed by Father Maximilian, the landlord of Vierzehnheiligen. Then the brass band of the Uetzing-Serkendorf music association set off with musical background, followed by representatives of the Envases management and all the invited guests. 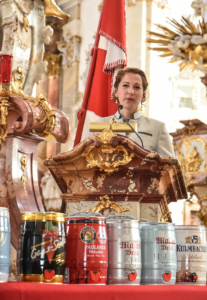 The Bavarian Beer Queen, Sarah Jäger, during her welcoming speech.

Inside the church, Father Maximilian started with an impressive sermon on the significance of beer. It was a first-rate outline of contemporary history that impressively illustrated that beer is not just a beverage. For thousands of years it was a basic foodstuff, a cultural asset, and several biblical passages attested to the importance of this delicious brew. The minikegs they brought with them stood decoratively lined up in front of the altar in the basilica and were even consecrated by Father Maximilian. After all, they served a good purpose and raised a considerable amount of money for those suffering in the Ukraine war.

The impressive sermon by the Basilica Guardian was followed by an address by the host, Jochen Weber. He had deliberately chosen the Basilica as the place for the pilgrimage, because it was “a place where we can come to terms with past crises and hardships and draw strength together for all the challenges that lie ahead,” Weber said in his address. Bavarian Beer Queen Sarah Jäger also gave a word of greeting. She, too, addressed the special challenges facing the brewing industry in recent years. But she gave those present a lot of confidence and an optimistic view of the future for a successful start into the 2022 beer garden season.

After the service, people have traditionally met for a hearty beer for centuries. This was also the case on 4/23/2022. The Trunk brewery inn located in the immediate vicinity of the basilica offered delicious amber nectar and a hearty snack for all invited guests. Even the Father did not hesitate to join the social crowd. Despite the difficult political situation, the drink was intended to remind everyone that summer is just around the corner. The intention was to radiate joy and optimism, because gastronomy is open again and the breweries’ stores are whetting the appetite for celebrations and cheerful get-togethers. 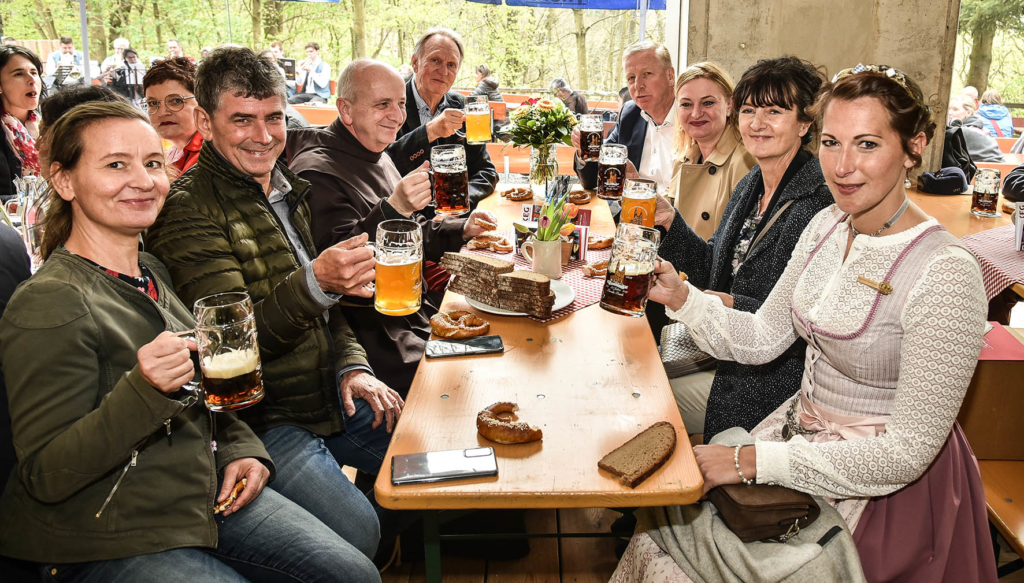 Envases sales manager Peer Brämer summed it up aptly: “We have to be grateful that we have all been able to cope well with the difficult last two years. That is why it is a personal concern for us to express solidarity with those who are caught up in this unnecessary and terrible war. But now it is also important to look ahead and look forward towards the summer and the good business it will bring. We’ve earned our optimism.”

The social gathering was accompanied by the best music from the brass band. Envases also used the occasion to bid farewell to Bernhard Kürschner, the marketing manager who had been with the company for decades, on his retirement. There was no one who did not go home that evening cheerful and in the best of moods – a thoroughly successful day! 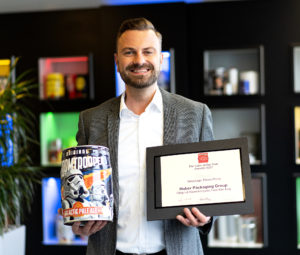 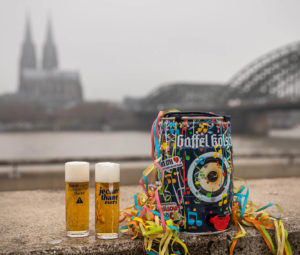 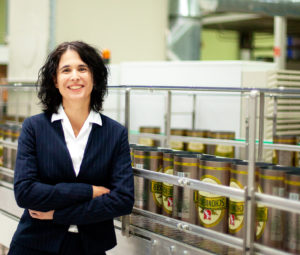